Some projects take longer than others.  And some seem like they will never end.  But if you stick with them and do a step at a time, you eventually get there.  This is the story of a project that literally grew up along with the Hack Factory, utilizing almost every tool in the shop at some point, and growing in complexity and ambition as the shop added (or I learned to use) new tools.  Welding jigs and test-fit parts were made in the wood shop, the welding shop was like my second home, and eventually I got comfortable with making some functional and even decorative items in the machine shop.  I even found use for the laser cutter in quickly cutting thin flat parts from wood to see how they would fit and act as a template for cutting the part from steel plate.

If you like motorcycles and you like ‘making’, building your own custom motorcycle is a strong temptation.  I succumbed to that temptation in 2011 after traveling a long winding road that touched on welding (as a sculptor), mechanics (as a bicycle repair tech), and long term interest in the tech behind some unusual motorcycles from the ’70s and ’80s.  Shortly before I joined TCMaker, I picked up this rough specimen for $100 (and with a free drill press thrown into the deal). 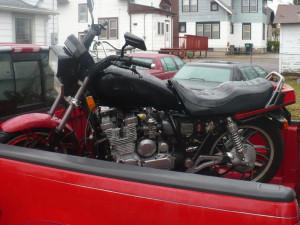 My initial plan was just to re-shape the rear end so that a new seat and tail unit could be mounted.  I wanted something that flowed better with the new tank, and was higher (I’m tall, with long legs, so most street bikes feel to short to me).  The Hack Factory was a much better option for doing this than my dilapidated, unpowered, unheated garage, but the shop manager understandably didn’t want a whole motorcycle taking up (at the time even more limited) storage space, or acting as a fuel & oil filled safety hazard.  To that end, I stripped the bike to just its frame, which was much easier to transport, store, and move.  This also opened up the potential for new modifications, as I could easily position the frame on a welding table and access any part for cutting or welding.  With every part of the bike removed, there was no reason not to change where they would be located when the bike was re-assembled, and in most cases I did!

All the body work was replaced and the battery relocated to under the gas tank.  The rear suspension was converted to a mono-shock, which also required removing the stock air box (replaced with a custom unit made of fiberglass and aluminum).  However, the largest change is that the entire front end is replaced with an adjustable, experimental design.  This setup is used on new BMW K series motorcycles, a few boutique models, and some race bikes.  I’d long dreamed of trying to build such a setup, but it never seemed realistic before (or even after) joining TCMaker.  With some research, patience, and the resources at the Hack Factory, it became a reality!  There were many mistakes along the way, but one of the things TCMaker is great at is letting you try things that might not work, and learn from your mistakes.

To cut a long story short, after about 200 days spread over 6 years in the shop of making parts, here is what I have.  As soon as it was running right, I took it right on the highway, complete with a video of the suspension in action!  There were a few bugs, but after dialing in the shock setting I find it rides amazingly well, as well as any motorcycle I have owned and better than some.  If it looks like something out of Mad Max, that’s fully intentional – I decided early on that my fabrication skills were not up to making something pretty, so I might as well not try and instead emphasize the experimental, improvised nature of the construction.  About half way through the project, I also found out about a Mad Max fan convention that takes place in the desert of California, and found a community of like minded vehicle builders, so ended up designing with that event in mind.  This cemented the name of the bike in my mind – a post-apocalyptic Yamaha SECA, the SECApocalypse. 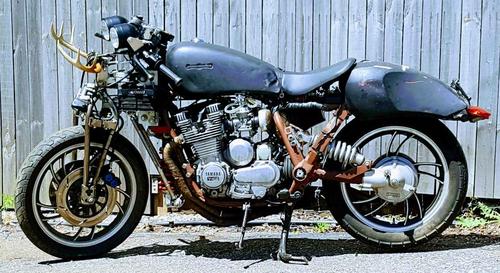 By using many individual parts bolted together, I was able to avoid having to rebuild any large pieces when I made a design or fabrication mistake.  There are a few tricky parts I made three times before I got a design that worked correctly through the whole range of vertical and steering motion, and many that I made two versions of.  Eventually I got smart and would make the first version from wood to test the fit and movement.

A very important part of this project was safety testing.  After talking with some vehicle engineers on an email list dedicated to experimental & racing motorcycle construction, I figured out that each axle needed to be able to take a load of as much as 1000 lbs (vertically).  For a margin of safety (since I would not be testing fatigue cycles) I wanted to test with 2000 lbs of force.  Its not easy to apply such a large, controlled force, but by building a heavy metal frame and using a crane scale and turnbuckle, I found a way.  A similar test was performed to ensure that pushing backwards on the front axle (and also on the brake tabs) with any force the front brakes could conceivably apply would not result in a disaster.  It was nerve wracking performing these tests knowing that a failure might mean months of rebuilding, but the confidence it gave me to take this bike on the road was well worth it.

I’d like to give special thanks to Steven Anderson (who has long served as our machine shop manager) for valuable input, education, and assistance as well as some mission critical tool repairs and upgrades, and for a lot of general interest info, safety tips, best practices, etc.  Clara Schiller (co-manager of the metal shop) helped with some challenging welds and keeping the welding machines and other metal shop tools consistently stocked.  Every time I went to cut a piece of metal or laid down a bead, the work these two did was making my work possible.  I’d also like to thank them both as well as the entire managing crew and board at TCMaker for constantly upgrading the metal working and over all work environment at the Hack Factory.  Without the classes and tools there, not to mention the space to work on and keep it in, this project would never even have started.  As I researched hacker spaces in general, I was surprised to learn that pace to store a project of this size (and several boxes of related tools) for 6 years is something most maker spaces either can not or will not do!  Apparently I was in the right city, at the right time.
Thanks also goes to Philip Williams, a member who loaned the shop some wicked machine tools just when I needed them, helped me to make a few of my more complicated, high precision pieces, and helped me figure out what I was doing wrong with some of my first cuts.

If you like to dig through a huge a random jumble of words and pictures, there is a compilation of all my forum posts related to this project in a thread on Customfighters.com.