A couple of weeks ago I posted an invitation to join my effort to build a musical bench of PVC.  Thank you to TC Makers Becca, Bill D, Bob G, Colleen, Jon, McSteve, Roxanne, Scott and Shawnuk for their generous help over the past 2 weekends.

Section 1 (of 6, foreground) is done! Sections 2-4 can be seen in the background as well as one paddle prototype.

Because of them I now have a paddle prototype, 4 sections cut, 2 sections in welding progress and one section complete!

My original plan was to have the bench finished by last night—not even close!  Several complications arose as we started to build:

Fellow TC Maker, Steve M, pointed out to me that before I began solvent welding, it would strengthen the bond if I increased the surface area where each pipe intersects.

There is almost no surface area at the intersection of 2 circles.

I tried using the band saw to shave off some of the pipe exterior and flatten the places where each pipe meets another but that was really messy and slow.

Bill D generously made a jig for me to use with a router which tremendously speeded the process back up.

This is me using the jig that Bill D made for shaving a flat surface into the edge of the PVC pipe using a router.

My friend Shawnuk stopped by the Hack Factory to help me work out details before I geared up to start building.  As soon as he saw my 4” diameter pipe samples, he pointed out that they would have to be much taller than bench height in order to make a musical note.

We tested this out and he was right.  Luckily, I had purchased only one pipe.   Recognizing that a 2” diameter pipe would probably work, I had to re-draw my design in Sketchup.  In order to keep the bench reasonably large, I now need to solvent weld 270 pieces!

My new bench design (foreground) compared to the old design shrunk along the horizontal axis to a 2″ pipe diameter. The old design would have been too small if made with 2″ diameter PVC pipe.

TC Maker, Colleen, can solvent weld better than anyone else I know.  She showed me that although bungee cords and rubber bands can be helpful to hold pipes together as they dry, as the welded section grows there is no substitute for just holding the pipes in place until they are dry enough to stand on their own.  This really slows the overall process when I am working alone.

As the size of the section grows, bungee cords no longer work to keep pipes in place as they dry. Here, Colleen holds several pieces together until they can maintain their position on their own.

Over the next several weeks I will post photos of my rocking-chair project as it progresses.  I welcome your feedback and hope that you will help me find a name for this chair.

My design is inspired by 2 sources: the Frank Lloyd Wright Origami Chair and the Converse All Star sneaker.  I’ve always wanted to re-design the Origami Chair as an updated, cool lounger.  The Converse reference came later, after hours of observation, when it struck me (and my friend Ann who stopped by the Hack Factory for a critique session), that my placement of masking tape around the rockers was reminiscent of a pair of red sneakers (more on this in a future post).

This probably looks like a simple chair to make but there are no right angles so it was tough!

A few years ago I made a large, black lacquered version of FLW’s Origami Chair and I kept one for my own home. 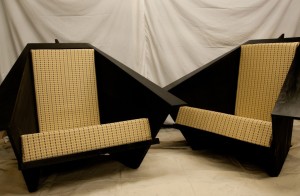 My original, very large version of the origami chair.

Using the chair at my home, I started my new chair by tracing a pattern onto poster board.  Then, I made another pattern about 2/3 the size of the large one, tweaked the proportions and used that pattern to cut the plywood. 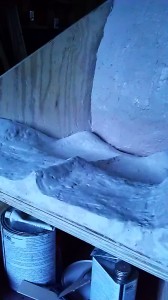 I am interested in learning tips for sanding complicated shapes like this. It is a slow process for me. 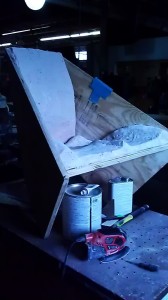 Once I assembled the plywood pieces I carved an ergonomic seat and back out of spray foam.  To create a smooth surface, I covered the carved foam in body filler and then did a lot of sanding.

Next week I will discuss the main design problem with FLW’s Origami Chair and whether or not I solved it.