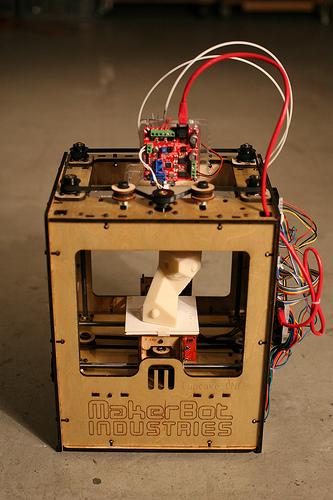 EDIT:  The drawing will be tonight, at 8pm CDT.  It will be streamed over Ustream- watch this space and the TCMaker twitter account for an address.

EDIT:  Ticket sales are now closed.  If you bought a ticket but haven’t received an e-mail informing you of your numbers for the drawing, or of a refund of your money, e-mail us and let us know.

The drawing will be Wednesday night, March 31, and will be streamed live over Ustream.  Watch this space for more information.

Shamelessly stealing Borrowing a good idea from our colleagues at AS220, Twin Cities Maker is putting up a raffle to fund the acquisition of a MakerBot.

Rules are simple: $5 a “ticket” (tickets are actually virtual- you’ll get entered into a spreadsheet and we’ll randomize a selection), 300 tickets are available, no limit (if you want to buy all 300, be our guest!).  Need not be present to win, nor a member of TCMaker (and membership is, of course, not going to improve your chances of winning).  We obviously can’t guarantee the delivery schedule (currently, they are on backorder until batch 14 is ready in mid-May; they are accepting pre-orders, but unless we sell out of tickets in record time, we will probably miss the pre-order bus, too).  Winner will be expected to pick up the prize from the Hack Factory- if you are outside of the metro area, we’ll drop ship it to you from the MakerBot mothership.

Buy your tickets via the usual Hack Factory payment methods: PayPal, or in person at one of our meetings with cash or check.  If you use PayPal, please make sure that you clearly state in the message that the money is for the raffle.  We’ll e-mail you back with a range of ticket numbers. Please do NOT use PayPal, as that would violate PP’s Acceptable Use Policy.

EDIT (3-24-2010  17:50 CDT): We’ll be selling tickets at tonight’s meeting; people out of town can e-mail us at twincitiesmaker[-at-]gmail.com and we’ll figure out a way to facilitate a distant payment for your tickets.

EDIT:  To be clear, the winner of the raffle gets a MakerBot.  This is a “one for you, one for me” thing- we’re selling enough tickets to fund the purchase of TWO MakerBots, and one goes in the Hack Factory.

Attendance at the TCMaker Clothesline and Halloween Costume Contest was pretty light, but we had a good time nonetheless.  The were four total entries in the clothesline race, two racers that had been built ahead of time, one was built from scratch on site out of LEGO and one that wasn’t quite done but made an attempt at running.

Nobody fully completed the course out and back, although Michael and John came very close with similar solutions at opposite ends of the complexity spectrum.  Scott’s racer made it down the cable one way and then failed catastrophically upon contact with the end plate.  It was difficult to judge an actual winner of the contest because a number of factors, so it was decided to reward all participants for making the effort. Prizes were distributed from the box of swag that Mike received from Make: Magazine.

At the very least by the end of the day we were all pretty excited about the concept and started to brainstorm about some fun ideas for future racers.

There were no entrants in the costume contest although as you can see from the group picture above there was a certain level of personal style from some participants that may have qualified.

Please visit the TCMaker flickr pool for more images from the gathering.  Mike has also now uploaded some pictures and video to our new Picasa public gallery.

Thanks to John for the venue, Jude for setup, Michael for the fun idea and to everyone that brought chow. 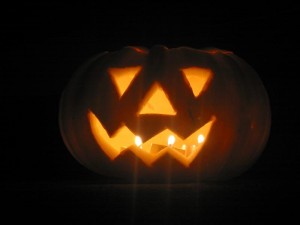 Twin Cities Maker is having a couple of Halloween Contests,  Saturday October 24th!

See the forum for the official rules, information on prizes and entry fees. Note that all entrants will receive their choice of a Make: t-shirt or one of the latest two copies of Make: magazine!