A couple of weeks ago I posted an invitation to join my effort to build a musical bench of PVC.  Thank you to TC Makers Becca, Bill D, Bob G, Colleen, Jon, McSteve, Roxanne, Scott and Shawnuk for their generous help over the past 2 weekends.

Section 1 (of 6, foreground) is done! Sections 2-4 can be seen in the background as well as one paddle prototype.

Because of them I now have a paddle prototype, 4 sections cut, 2 sections in welding progress and one section complete!

My original plan was to have the bench finished by last night—not even close!  Several complications arose as we started to build:

Fellow TC Maker, Steve M, pointed out to me that before I began solvent welding, it would strengthen the bond if I increased the surface area where each pipe intersects.

There is almost no surface area at the intersection of 2 circles.

I tried using the band saw to shave off some of the pipe exterior and flatten the places where each pipe meets another but that was really messy and slow.

Bill D generously made a jig for me to use with a router which tremendously speeded the process back up.

This is me using the jig that Bill D made for shaving a flat surface into the edge of the PVC pipe using a router.

My friend Shawnuk stopped by the Hack Factory to help me work out details before I geared up to start building.  As soon as he saw my 4” diameter pipe samples, he pointed out that they would have to be much taller than bench height in order to make a musical note.

We tested this out and he was right.  Luckily, I had purchased only one pipe.   Recognizing that a 2” diameter pipe would probably work, I had to re-draw my design in Sketchup.  In order to keep the bench reasonably large, I now need to solvent weld 270 pieces!

My new bench design (foreground) compared to the old design shrunk along the horizontal axis to a 2″ pipe diameter. The old design would have been too small if made with 2″ diameter PVC pipe.

TC Maker, Colleen, can solvent weld better than anyone else I know.  She showed me that although bungee cords and rubber bands can be helpful to hold pipes together as they dry, as the welded section grows there is no substitute for just holding the pipes in place until they are dry enough to stand on their own.  This really slows the overall process when I am working alone.

As the size of the section grows, bungee cords no longer work to keep pipes in place as they dry. Here, Colleen holds several pieces together until they can maintain their position on their own.

Hey, thanks very much for checking out my blog!

Last week I promised to discuss the influence of Chuck Taylor shoes on my chair design.  However, I need to take a short break from my rocker to create a bench for a block-improvement effort in the Dayton’s Bluff Community. 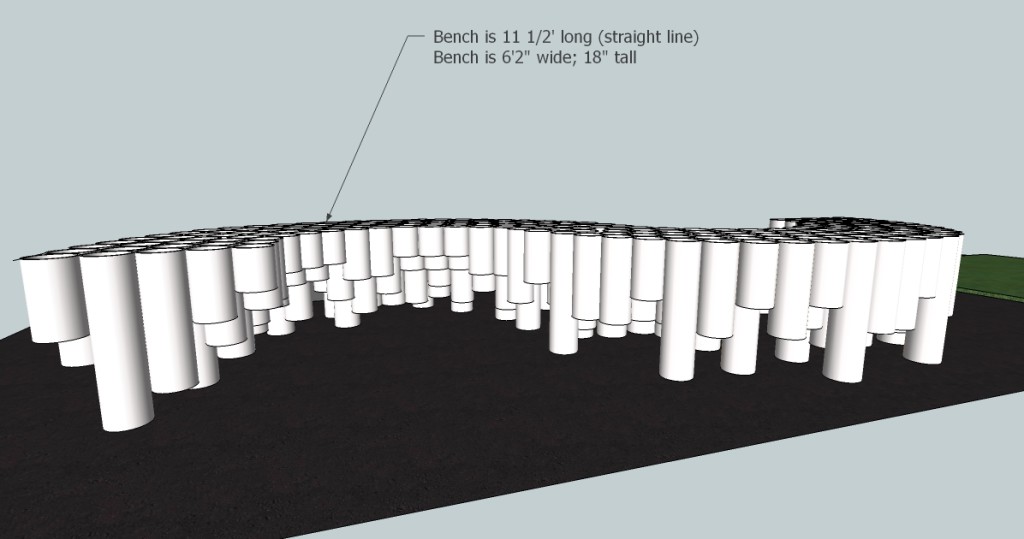 This is the bench that I designed for the block improvement effort at Dayton’s Bluff. To construct it, I must solvent weld 210 pieces of PVC pipe. I need a few volunteers to help cut PVC pipe and solvent weld so that I can finish the bench by July 20, 2013.

In this post, I will describe the bench design and invite you to help build it!  Interested?  Shoot me an email at [email protected]!

All participants will learn how to solvent weld PVC.  The skill is used to build many exciting maker projects from potato launchers  to musical instruments like the ones played by the Blue Man Group.  In fact, the bench that we build can be used both for rest and to play a few tunes while waiting for the bus!

Two sets of foam-rubber paddles with wood handles will be attached to the bench using a small gauge steel cable. The paddles create a musical sound when the player strikes the top end of the pipe (the foam rubber must cover the entire opening) forcing the air out the bottom very quickly. The length of the pipe determines the pitch of the note. Shorter pipes produce higher notes and longer pipes produce lower notes.

To make construction easier, I designed the bench in 6 sections.  Each section is 39 inches long and 19 inches wide.  Five of the sections are identical (just oriented differently) and one section is unique. Once I have all of the sections on site, I will bolt 3 pipes from each section to 3 pipes in an adjacent section.

Pink, orange and green colors identify 3 of the 6 sections that comprise the PVC bench. The bench will be made in sections for ease of transport and installation. The Dayton’s Bluff Community Council will remove the bench in the winter to avoid damage from snow plows.

The design uses PVC pipes of 5 different lengths with the longest pipes serving as the legs of the bench.  Standard bench height is 18 inches and each section of the bench has four 18 inch-long pipes.  Placement of these bench legs will be important for balance and stability. 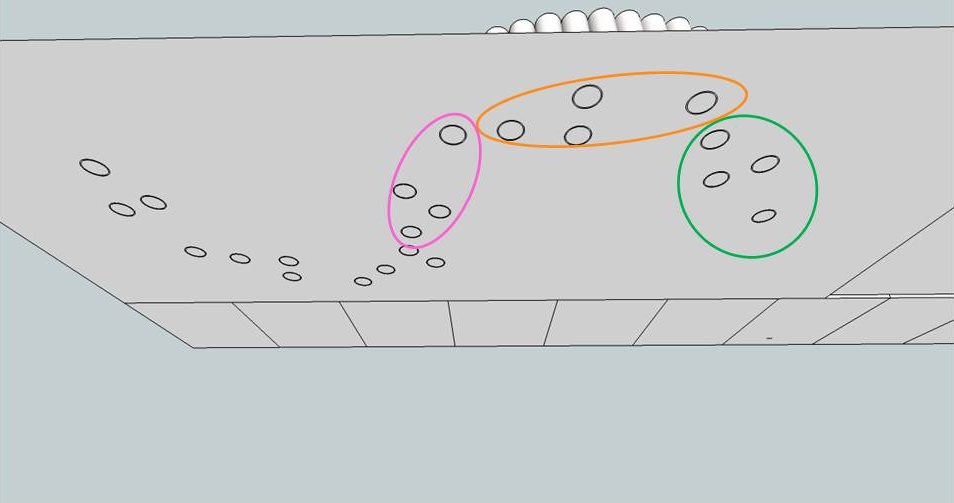 This is a view from underneath the bench illustrating how many 18 inch-long PVC pipes there are in each section. Only the longest (18 inch) PVC pipes touch the ground and, thus, it is only the 18 inch pipes that are displayed in this view.

Please contact me at [email protected] to help build a bench for a better block in the Dayton’s Bluff community!