The laser is up! (mostly) 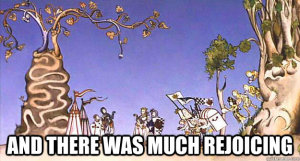 I am quite pleased to report that the laser cutter is back in action mostly! Turns out it was the power supply, and the new unit has been bodged into place. I’ll put some decent connectors on the wiring next Thursday, but what’s there is good for now (just not long-term durable).

So about that ‘mostly’ part: The magnetic safety switch is acting up. It looks like the magnet on the lid has either moved a bit (unlikely), or has lost some magnetism (still unlikely), or the switch itself is losing sensitivity (more likely). It’s been temporarily fixed by taping a chunk of fridge magnet on top of it, which adds enough oomph to get the switch to activate. Another thing to get fixed next Thursday.

The plan is to put in the new laser tube, mirrors, and beam combiner on Thursday 6/1. If you’d like to help out, or just hang out and kibbitz, come on by. I’ll probably be starting around 7pm.