When you come into the shop, you’ll see some scary red signs all over the place: 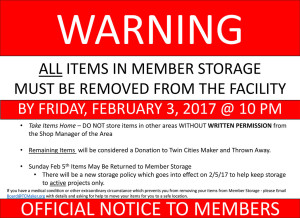 The signs have got the basics on them, but you’re probably looking for more. Here’s a more in-depth explanation.

At our next quarterly cleanup, Saturday 2/4/2017, we’re going to completely clean out and rearrange the member storage area. All the nooks and crannies will be swept out, shelving rearranged, and probably a little bit more shelving added. To get this all done, we’re asking that everyone take their stuff home temporarily, by Friday night 2/3/2017. You’ll be able to start bringing stuff back in on Sunday.

Is member storage going away?

Not at all. We just need to get everything out of storage before we can get any meaningful work done. Also, there are new rules coming that changes the size of bin we’re allowing.

Yes. Bins will now be a standard model and size (Ikea Klämtare, which is 22.75″ x 17.75″ x 11.75″). That’s a little smaller than the 18-gallon size we allowed before, but not by that much. Having everyone use the same style bin makes them easier to pack onto the shelves, and ensures that everyone is getting the same amount of space. Bins will need to have their lids attached, no tall stuff poking up is allowed!

So where are these rules?

I’ll put a link up to the new rules as soon as they’re finalized. They’re mostly done, we’re just putting the last bit of polish on them. The basics stay the same: each member can have a bin; stuff that doesn’t fit in the bin has to be actively worked on; don’t store dangerous stuff in your bin. The new rules will formalize the process of requesting space for larger projects, and explain how we’ll be policing the storage room to keep things from devolving into chaos.

What if I can’t get my stuff out by the deadline?

If you don’t think you can get things out by Friday 2/3/2017, please contact [email protected] as soon as possible. We’ll try to work something out. We don’t have a lot of additional areas to move stuff around, so we’ll work out details on a case by case basis.