It just so happens that I’m a member of a local Star Trek fan club, as well as a TCMaker board member. (I am a multi-purpose nerd.) For the past eight years the USS Nokomis has run a party room at CONvergence. Last year the hotel was remodeled, and an 8 foot long, marble-topped desk replaced a (somewhat) easily-removed armoire. Since we can’t get it out of the room, I came up with an idea to make it fit into our Original Series decor — turn it into a control panel.

I recruited fellow Nokomis and TCMaker members Blair and Bob to help put it all together. Blair took my concept and turned it into a set of plans to follow for construction. Blair is an absolute genius at this sort of thing; he knows how to make things light yet sturdy, and easy to assemble. The panel was built to split into two sections, with pins to line the halves up and carriage bolts to hold it together. The assembled halves simply drop on top of the desk, with a lip around the front and sides to hide the marble. 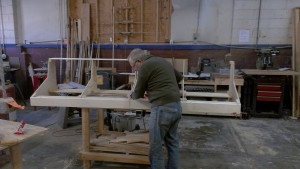 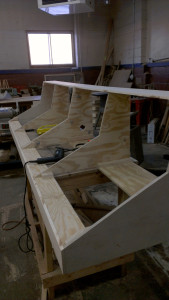 Blair also put together a “Spock viewer” hood. Sadly the knob didn’t survive the workout it got the first night of the con. That’s something we’ll have to fix for next year. At the base of the hood we mounted a digital picture frame, loaded up with a few short movie clips. 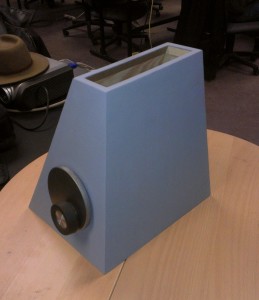 Meanwhile, Bob was casting buttons. Lots of buttons. More than 150 tinted resin buttons, using a pair of smallish ice cube trays as molds. Each button had to be sanded on the bottom to flatten them off, so they could be glued onto curved Sintra panels. The Sintra was cut on one of the Hack Factory’s CNC machines. Each button sits over a hole cut through the Sintra and into the main panel surface. Below the panels, a pair of flourescent fixtures shine light through the buttons. 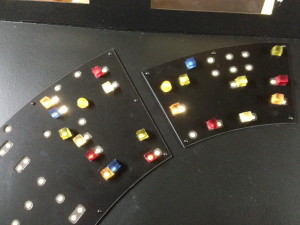 Also meanwhile, I was figuring out how to build the displays. We settled on five displays, one static image and four with blinking lights. Each of the display faces is a sheet of 1/8″ thick bronze-tint acrylic. A mask was cut out of black adhesive vinyl and stuck to the back of each face. Then lighting gels were cut and applied with double-sided tape. Finally the entire panel was covered over with a diffuser sheet. 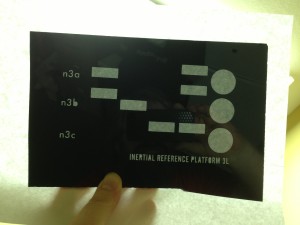 Testing the mask on a scrap of acrylic 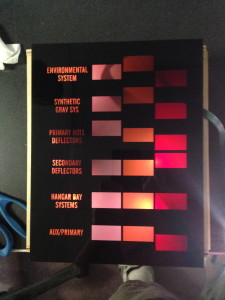 A full-up test with gels in place

Behind each display is a box to contain the lights and, for the animated displays, a set of tagboard “eggcrate” dividers. The static display is lit with a set of Ikea Dioder disk lamps. The other four displays are lit with a 50-lamp GE Color Effects light string, threaded across all four displays. Holes drilled in the backing boxes hold each lamp; the tagboard dividers keep each light cell separated from the others. The string is driven by an Arduino Uno. 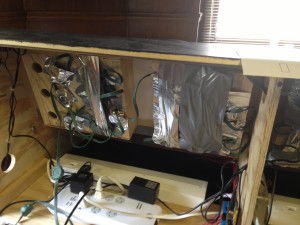 Lots of tape holds the LED lamps in place 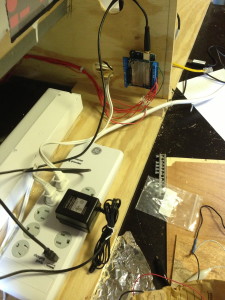 The Arduino also scans the bank of 8 switches on the control panel. When a switch is flipped, the Arduino passes its pin number up the serial connection to a Raspberry Pi. A simple Python program on the Pi runs a background sound loop, plus plays sounds as the switches are flipped. (The code was freely adapted from an article on the Make: blog.) A pair of amplified computer speakers was cannibalized and installed inside the panel. Unfortunately the amp wasn’t powerful enough to overcome the con’s background roar — yet another thing to fix for next year.

Even with the weak sound, the panel was a huge hit. It really pulled the room together. 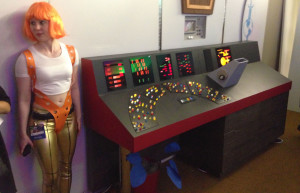 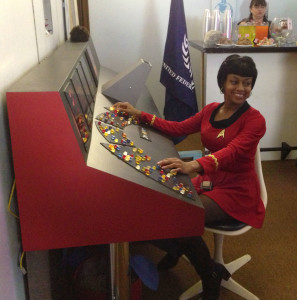 Huge, Constitution-class-sized thanks to my cohorts Blair and Bob for their hard work and prop building talents; to the USS Nokomis members who work hard every year to pull together our party room; and to Twin Cities Maker for the use of tools and build space, and for being generally awesome. 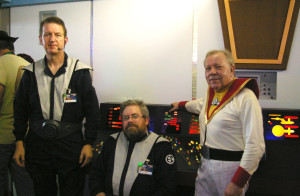 The builders: Bob, Scott and Blair