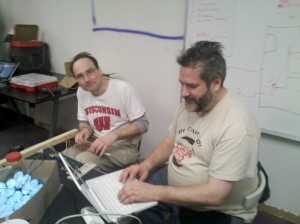 A few shots from Jan. 26th’s open meeting at the Hack Factory, lots of interesting things going on, a few things of note.

Two bows (the bow and arrow type) were being built, a successful foray into C turned some addressable Led lights into an array that spoke of “Hey Jude”, a new permutation of the arduino The Arduino Stripper saw the light of day and half a dozen or so were sold for 10 bucks a piece. The makerbot got introduced to Hunter S. Thompson’s double thumb.

The Hack Fac got introduced to Make’s new streaming show, Make: Live. Wayne started to try un-hacking the garage remote control that stopped working after the first attempt. Mike had his gloves on cleaning the gears of a piece of our equipment that has seen better days. Paul lost to Mat several times at Go.

It was a great night, a lot of other stuff was happening that I didn’t get a chance to take photos of. It was great seeing everyone. See you guys at this weekend’s Handmade Music: Minneapolis Hmmm4

Short video of a work in progress at the Hack Factory. These LED are addressable.