The soul of an old machine 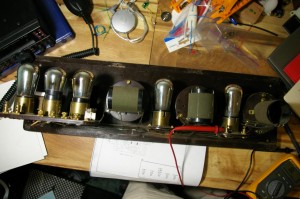 This spring I’ve been taking a hands-on class on vintage radio repair at the Pavek Museum of Broadcasting. The first radio I brought in (an RCA 96T1, ca. 1938) I thought would be simple. It turned out to be in pretty bad shape — bad power transformer, bad speaker, almost all the caps need replacing… In short, it’s turned into a major project.

So I switched over to my other radio, a 1925 Atwater-Kent Model 20 “big box.” It’s a lot simpler than the RCA: 5 01A tubes, 3 condensers, a handful of resistors and capacitors. I also thought it’d be simple, and I was again wrong. 3 out of the 5 tubes tested bad. The grid-leak detector had been replaced with a soldered-in fuse in an earlier repair attempt. Thanks to the museum’s massive supply of vintage parts those items were fixed in short order, but when power was applied I found none of it was getting to the RF tubes.

Luckily, this radio was made at a time when manufacturers expected people to repair things. Remove 8 screws from the front plate, and the entire chassis lifts out, revealing all the components. A bit of poking with a multimeter (and a trip to Google for a better schematic) soon revealed a bad solder joint. And a wound wire resistor that’s open, so I have to fix that next. Then I’ll have to build a power supply — did I mention this thing runs off lead-acid batteries?

I keep reminding myself that, with all the troubles I’ve run into, I’m learning a lot….